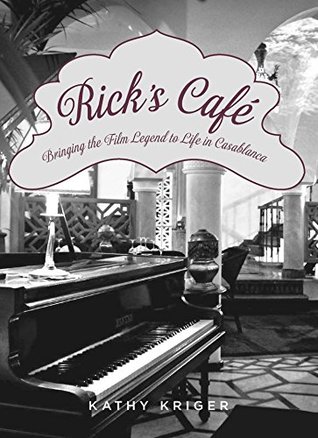 For more than 60 years, tourists visiting Casablanca tried to visit Rick’s Café Americain only to discover that Warner Brothers had built the entire set on a studio back lot. It was a Hollywood fantasy—until Kathy Kriger came along, that is, and decided after 9/11 to bring the imaginary gin joint to life. In RICKS CAFE, she takes us through souk back alleys, the Marché Centrals overflowing food stalls, and the shadowy Moroccan business world, all while producing, directing, casting, and playing lead actress in her own story.

Instead of letters of transit, she begged for letters of credit- the governor of Casablanca watched her back instead of Captain Renault- and at the piano, playing “As Time Goes By,” sits not Sam but Issam. She encountered paper pushers, absent architects, dedicated craftsmen, mad chefs, and surprising allies.

It took over two years, but now, as Captain Renault says to Major Strasser, “Everybody comes to Rick’s.” Here is the remarkable story of a woman who turned Hollywood fantasy into Moroccan reality and made her dream come true.

Comments
Comments for "Ricks Cafe: Bringing the Film Legend to Life in Casablanca":