Drama and Desire: Art and Theatre from the French Revolution to the First World War Guy Cogeval 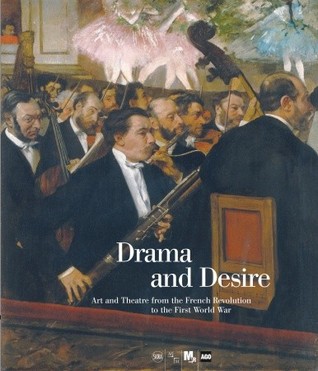 A lavishly illustrated catalog exploring the relationship between art and theater during the long nineteenth century. The book examines works by some of the most significant French and English artists of the eighteenth and nineteenth centuries. The exhibition and its catalogue aim to connect elements of the modern tradition with the return to interest in Antiquity that emerged in Europe during the period 1750-1900, fuelled by the discovery of Pompeii and the pioneering theories of Adolphe Appia and Edward Gordon Craig regarding the dematerialization of the stage.

This triggered a surge of passion for theatrical performances and for theatre in general. The period begins in the time of Voltaire and Jacques-Louis David and ends with the last vestiges of Symbolism, a century and a half during which European painters took a continuous interest in the parallel development of stagecraft.

What emerges is a symbiotic exchange between the imagery of the stage and that of painting. Not only did such masters as Jacques-Louis David, Paul Delaroche, Eugène Delacroix and Gustave Moreau design costumes and sets for the theatre, but they also began to infuse their paintings with the artifice of the world of theatre, giving dramatic emphasis to the actions portrayed and adopting the system of perspective used in designing theatrical sets. The generation of Symbolist artists - particularly the Nabis -epitomizes this rich creative exchange.

As this book demonstrates, the progression of art and painting toward abstraction was not as straightforward as is often suggested: it effectively traveled along several paths at once and included the close interaction between easel painting and visual representation in the dramatic arts, as well as changes in the concepts of space and expressions, each influencing and fuelling the other. The extraordinary results are illustrated in the pages of this book.

Comments
Comments for "Drama and Desire: Art and Theatre from the French Revolution to the First World War":