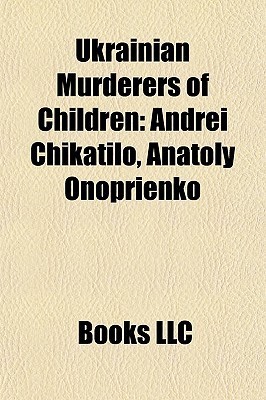 Source: Wikipedia. Pages: 28. Not illustrated. Free updates online. Purchase includes a free trial membership in the publishers book club where you can select from more than a million books without charge. Excerpt: Andrei Romanovich Chikatilo (Russian: , Ukrainian: October 16, 1936 February 14, 1994) was a Soviet serial killer, nicknamed the Butcher of Rostov, The Red Ripper or The Rostov Ripper.

He was convicted of the murders of 53 women and children, mostly in Rostov Oblast, Russian SFSR, between 1978 and 1990 (some victims were murdered in other regions of Russia and in Ukrainian and Uzbek SSRs). Andrei Chikatilo was born in the village of Yablochnoye (Yabluchne) in modern Sumy Oblast of the Ukrainian SSR.

At the time of his birth, the Ukraine was in the midst of famine caused by Joseph Stalins forced collectivisation of agriculture. Ukrainian farmers were forced to hand in their entire crop for statewide distribution. Mass starvation ran rampant throughout Ukraine, and reports of cannibalism soared. Chikatilos mother, Anna, told him that his older brother Stepan had been kidnapped and cannibalized by starving neighbors, although it has never been independently established whether this actually happened.

Chikatilos parents were both farm labourers who lived in a one-room hut. As a child, Chikatilo slept on a single bed with his parents. He was a chronic bed wetter and was berated and beaten by his mother for each offense. When the Soviet Union entered World War II, his father, Roman, was drafted into the Red Army and subsequently taken prisoner after being wounded in combat. During the war, Chikatilo witnessed some of the effects of Blitzkrieg, which both frightened and excited him. On one occasion, Chikatilo and his mother were forced to watch their hut burn to the ground.