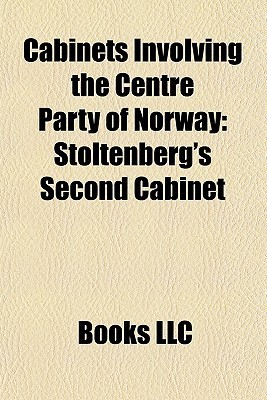 Source: Wikipedia. Pages: 38. Not illustrated. Free updates online. Purchase includes a free trial membership in the publishers book club where you can select from more than a million books without charge. Excerpt: Stoltenbergs Second Cabinet is the current government of Norway.

Appointed on 17 October 2005, it is a coalition between the Labour Party, the Socialist Left Party and the Centre Party, known as the RedGreen Coalition. The cabinet has ten members from the Labour Party, five from the Socialist Left Party and four from the Centre Party. It replaced Bondeviks Second Cabinet following the 2005 parliamentary election where the three parties won a majority in parliament.

In the 2009 parliamentary election, the three parties retained their majority, and the coalition continued. The cabinet is the first time the Socialist Left Party has sat in government, and the second time, after the post-war interim Gerhardsens First Cabinet, where the Labour Party sits in a coalition government. It was the first cabinet to have had a majority of women, and the first to have had a member with a non-Western heritage.